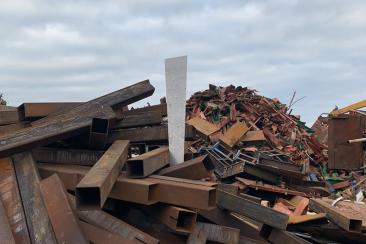 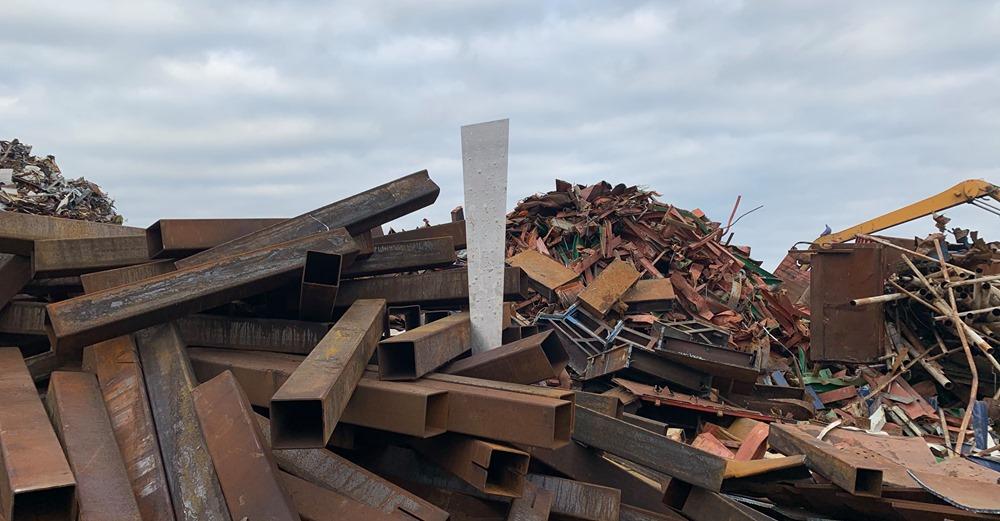 This mysterious monolith has been found among the scrap metal of a company in Leewarden, called Van der Meulen Metaal, a scrap factory. Nobody there knows how it got there, but camera images showed a huge flash of light just before it appeared...,

It looks like fan-shaped edited, matte and a silber coloured surface.
Unfortunately no information about the mono in its entirety.

This is a highly suspected publicity stunt of the company, and classified as a known origin, however the company has not taken credit.

Notes
A mysterious monolith has been found at Van Der Meulen Metaal in Leeuwarden. It is a wonder how the steel thing ended up in between all the scrap iron.
Monolith on Leeuwarder's junkyard
So recently such a mystery was found in the piles of old iron and metal of Van Der Meulen Metaal. Nobody knows how the bar of iron ended up in between all that iron. “We leave it nice and stay away from it,” says Van der Meulen himself. “After all, you never know whether it is extraterrestrial, perhaps even poisonous. But if it turns out that it is all safe and it is one valuable metal, well, we will probably sell it to the highest bidder or he will go into the shredder. ”
Mighty region of the metal farmers on Einsteinweg. You can also view it if you want. Pure art, folks. Or secretly aliens.
Dates & Classification
Date Spotted
2020-12-09
Classification
Known Origin, monoliths with little mystery surrounding them due to their known origin
Multiple Monoliths
✖
Physical Qualities
Material
Generic Metal
Number of Sides
Three Sided (Typical Monolith Design)
Texture
Brushed
Hammered
Other
Top Geometry
Flat
Markings
No Markings
Articles & Media
drimble.nl
Monolith on Leeuwarder's junkyard
Company Facebook Post